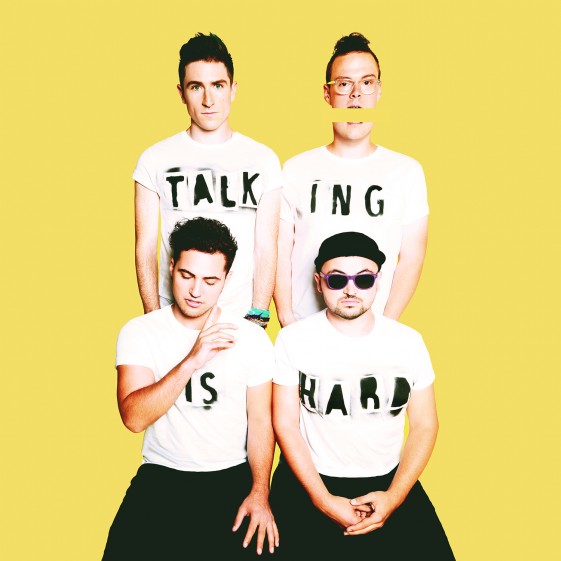 Just off the heels of their sold out underplay tour; critically praised alt pop band WALK THE MOON announces 2015 headlining “TALKING IS HARD TOUR”. WALK THE MOON’s sophomore album “TALKING IS HARD” is due out December 2nd on RCA Records and is available for pre-order now at iTunes and Amazon with “Different Colors” as the instant grat track (LISTEN HERE). To celebrate their album release, the band will be performing their smash hit single “Shut Up and Dance” and more on the outdoor stage on ABC’S Jimmy Kimmel Live! on December 2nd (TICKETS HERE).

“Shut Up and Dance” held the #1 spot on the Spotify viral top 50 US chart for two consecutive weeks following its release and was last week’s iTunes single of the week. The song just crashed into the top 15 at Alt radio and is rapidly moving up the charts.

Having just wrapped their sold out underplay tour, “SHUT UP AND TOUR 2014”, WALK THE MOON will be hitting the road again in 2015 to support their new album on the “TALKING IS HARD TOUR”. The tour kicks off in San Diego on March 10th and will finish up in LA Vegas on May 9th, The Griswolds will be main support. Starting tomorrow, November 18th at 10:00 AM local time, you can enter a special pre-sale for tickets with the option to get a VIP/Early Entry Package. The bundle includes a skip the line pass, exclusive tour poster, commemorative laminate and tote bag that will be available for purchase at http://www.walkthemoonband.com/ with the password “SUAD”. General tickets go on sale Friday at 10:00 AM local time at www.walkthemoonband.com.