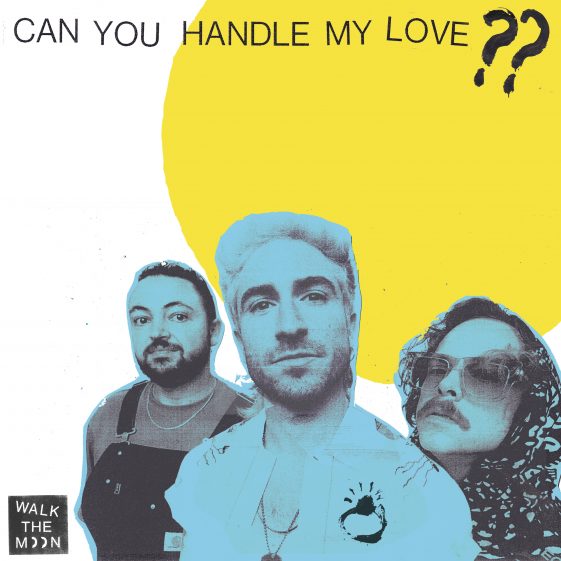 WALK THE MOON Drop New Three Song Bundle – First Single “Can You Handle My Love??” Out Now Along With The Music Video

WALK THE MOON DROP NEW THREE SONG BUNDLE – FIRST SINGLE “CAN YOU HANDLE MY LOVE??” OUT NOW ALONG WITH THE MUSIC VIDEO

PERFORMING “CAN YOU HANDLE MY LOVE??” TONIGHT ON NBC’S LATE NIGHT WITH SETH MEYERS

(Los Angeles, CA – July 14th, 2021) Critically acclaimed band WALK THE MOON return today with an exciting drop of three new songs. First single “Can You Handle My Love??” which was a collaboration between WTM, Tommy English (BORNS, Kacey Musgraves, Andrew McMahon) and K.Flay and produced by Tommy English and Mike Crossey comes alongside a colorful and dynamic music video which was shot in Los Angeles last month. Watch HERE. Tonight, the band will be performing “Can You Handle My Love??” on NBC’s Late Night with Seth Meyers.

Alongside “Can You Handle My Love??” comes new tracks “Giants” and “I’m Good” rounding out the first new taste of WALK THE MOON music in over a year. Listen HERE. The band has been in the studio, working remotely in many cases, finishing up their highly anticipated fourth studio album titled HEIGHTS which will be released this fall 2021. With the band members separated from each other and from their producers, they often collaborated virtually, building this new body of work in a way they never have before.

“‘Can You Handle My Love??’ is a song about how trying to be perfect is totally ridiculous. Whoever hears these songs, I want them to be reminded of what they love about life.” – Nicholas Petricca, Lead Singer

WALK THE MOON will be hitting the road this fall on their “Dream Plane” tour which kicks off September 20th, 2021 in Tampa, FL. Tickets will be on sale to the public on Friday, July 16th at 10am local time. To purchase tickets go HERE.

About WALK THE MOON
Hailing from Cincinnati, OH, WALK THE MOON consists of Nicholas Petricca (singer/keyboardist), Eli Maiman (guitarist), and Sean Waugaman (drummer). In 2015, the band catapulted to stardom when their hit single “Shut Up and Dance”, which is included on their RIAA Certified Platinum album TALKING IS HARD, became a multi-platinum global smash that peaked at No. 1 on the Alternative, Hot AC, and AC charts, went to No. 2 at Top 40 radio, No. 4 on the Billboard Hot 100, and broke the record for consecutive weeks at #1 on the Billboard Hot Rock Songs chart. Throughout their career, the band has had a slew of honors including winning two Billboard Music Awards, and nominations for an MTV Music Video Award for Best Rock Video, American Music Award for Favorite Pop/Rock Duo Or Group, New Artist of the Year, and Favorite Alternative Rock Artist and iHeart Radio Music Award for Best Duo/Group of the Year, Song of the Year, and Alternative Rock Song of the Year for “Shut Up and Dance.” WALK THE MOON’s third album, 2017’s What If Nothing, included hits such as “Kamikaze” and the #1 Alternative Radio hit “One Foot”. WALK THE MOON’s highly anticipated fourth album is due out later this year.

To Buy/Stream/Watch “Can You Handle My Love??”: