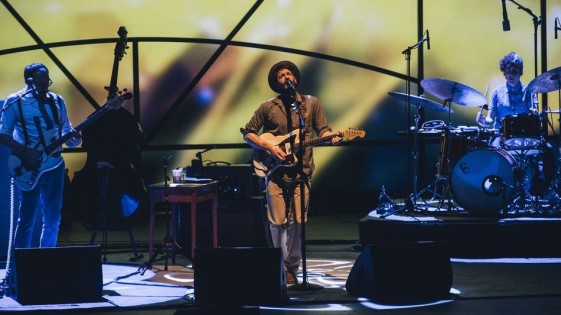 By: Emily Blake via Mashable

Watching Ray LaMontagne’s new video for “Hey, No Pressure” is sort of like picking up a kaleidoscope for the first time.

While you may have seen 360 virtual reality music video before  —- Run the Jewels used it for “Crown” — chances are you haven’t seen something quite like this. Director Peter Martin (who also directed “Crown”) worked with Jaunt Studios and the singer-songwriter’s trippy aesthetic to create an at times dizzying, immersive three-dimensional experience.

Mashable premiered the clip on Facebook. The video is available on the Jaunt VR app.

LaMontagne worked with My Morning Jacket’s Jim James on the album.

Speaking to Rolling Stone, he said, “This is a record that easily could have been built sort of brick by brick, piece by piece, but rather than that, we just played it as a band, and I think that’s what really makes it stand out for me. Playing it as a band in the same room, it feels very open, very patient. But at the same time, there’s a weight to it. It’s almost weightless and dense and really heavy at the same time. It’s really magical. Something really magical happened.”