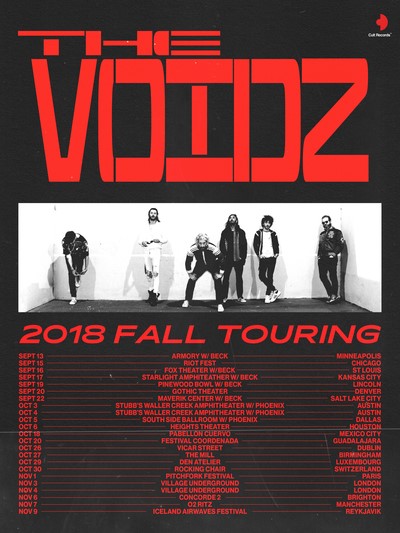 Formed 5 years ago now from a mutual love of the beat-driven and aggressive, as well as underground world, old jazz, and the avant-garde, The Voidz are a band that take pride in their versatility… Consisting of Jeramy Gritter (aka Beardo), a highly skilled and flavored guitarist as well as the self-proclaimed “trailer park hero”, Amir Yaghmai, virtuoso guitarist (grew up playing violin, then discovered metal), Alex Carapetis (aka Young Pirate) on drums – bringing a whole new level of rhythm to rock music. One of the founding members, Jeff Kite, a composer, on keyboards, alongside key spirit-guide, wordsmith and piano-king Jake Berkovici on bass and synths, the voice and wise, stabilizing anchor. And Julian Casablancas on vocals, as well as directing, curating and riding the lightning-wave put forth by this creative, talented, band of characters. A collaboration of mutual respect, founded on old friendships and musical kinship….

The band released their second album, ‘VIRTUE’, earlier this year and have been playing select shows over the past few months. The album earned raves from the New York Times, SPIN, Billboard, and more, with Stereogum saying in an epic 10,000+ word review “a truly riotous album…it holds back nothing,” and Vulture stating “it feels like a new beginning,” adding that (VIRTUE) is “inarguably (Julian Casablancas’) best album since…pick your favorite early Strokes album.” The band also appeared on The Tonight Show Starring Jimmy Fallon, as well as The Late Late Show With James Corden.

They return to the road next week, beginning September 13th. All dates are listed below, including select shows with Beck and Phoenix.