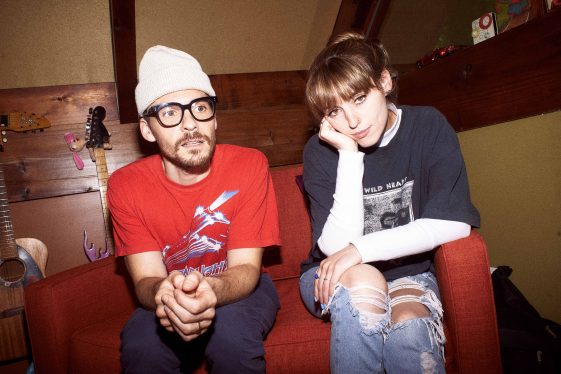 The track was produced by Winnetka frontman Matthew Koma, and co-written by Koma, Dan Book and Sasha Sloan. Wistful lyrics “It doesn’t mean, it doesn’t mean that I loved you any less/Just cause we reached the end” are surrounded by a dreamy, indie pop bouncing melodies, a signature sound that Koma and band excel at.

Matthew Koma of Winnetka Bowling League offers: “barcelona is a song about still being able to have love for the person that it didn’t work out with. I always feel the urge to discredit every ounce of a relationship after it’s over because it feels way better than scrolling the highlight feed…but sometimes there was a lot of good worth recognizing & the ending doesn’t have to be this big dramatic ‘delete all.’ I had a super rough voice note of the chorus on it, and I sent it to Sasha.  She told me to finish it, and when I did, she was sweet enough to lend her voice to it.”

Sasha Sloan continues: “Winnetka Bowling League opened for me on tour (before Covid and the world fell apart). Matt and I hit it off on the road and we’ve kept in touch ever since. When he sent me ‘barcelona,’ I fell in love with it and wanted to jump on the track!”

“barcelona” is the first single from Winnetka Bowling League’s forthcoming EP and follows their 2020 critically-acclaimed Congratulations.

Lead singer and band front man Matthew Koma is an award-winning performer, songwriter and producer who has worked with a diverse range of artists including Bruce Springsteen, Keith Urban, Demi Lovato, Britney Spears, Tiësto, Ryan Tedder, Pentatonix, RAC, The Knocks, Shania Twain, Kelly Clarkson and many more. New Jersey raised, Koma formed Winnetka Bowling League in 2018 in Los Angeles along with his brother Kris Mazzaris on drums and released their self- titled EP. Their second EP Cloudy with a Chance of Sun was released in 2019 and followed by Congratulations in 2020, all brimming with finely tuned guitar pop, catchy lyrics and perfectly calibrated songwriting. Rounding out the band are Sam Beresford on keys and newest band member Sage Chavis on bass and vocals. The Los Angeles Times declared their debut “On The 5” as an “undeniably anthemic pop,”  V Magazine described “Grammy-winning singer-songwriter Matthew Koma…[as] raw and honest, possessing a dry sense of humor that is reflected in both his songs and his mannerisms…[Winnetka Bowling League is] the perfect pairing of deep lyrical content and alternative rock melodies,” and Idolator raved “Winnetka Bowling League continues to roll out hands-in-the-air pop/rock anthems at an alarming rate.”

After emerging late 2017 and appearing on a handful of high-profile collaborations, 26-year-old singer/songwriter Sasha Sloan released her debut single “Ready Yet.” Since then, she has established herself as a true wordsmith, an artist’s artist, who crafts potent melodies filled with poignant lyrics. As a songwriter Sasha has amassed over 3.6 billion streams by penning hits for some of today’s biggest artists. In 2018 Sasha released her first two EPs, Sad Girl and Loser. Her track “Normal” was heralded by Billboard as a “catchy introvert anthem.”  These emotionally-rich, left-of-center pop releases lead to her late night debut on The Late Show with Stephen Colbert in 2019 with a performance of “Older.” That year, Sasha completed her first North American and European headline tours (sold out) and released her 3rd and final EP Self Portrait, which had her single “Dancing With Your Ghost” as Idolator’s 6th “75 Best Pop Songs Of 2019.” She also scored a #1 on the Dance Chart for “I’ll Wait,” her collaboration with Kygo. Sloan’s critically acclaimed debut album Only Child was released in late 2020. Sasha recently released her first taste of new music in 2021 with “when was it over?” feat. Sam Hunt.