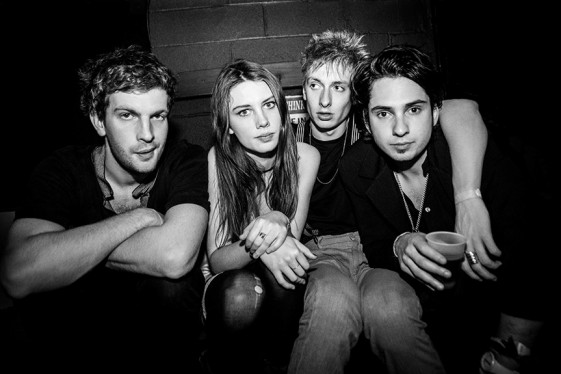 Today, London-based rock band, Wolf Alice, announce they will be joining The 1975 on their U.S. tour. In addition to Wolf Alice’s own headlining U.S. tour and their dates with The 1975, the critically acclaimed four-piece will be supporting electronic band, Chrvrches, for shows in Oakland and Las Vegas. They will also be making a number of festival appearances including Coachella and Sasquatch!. Tickets for all Wolf Alice Tour dates are on sale now. See full list of tour dates below.

Wolf Alice released their debut album entitled My Love Is Cool on June 23rd via Dirty Hit/RCA Records. The album racked up acclaim across the globe with NPR saying, “Wolf Alice is a band (…) whose crunchy, decidedly rock-oriented reinvention is steadfastly unthreatened by a catchy pop melody, a sweet, thoughtful harmony or an earworm bridge and chorus.”  They performed their U.S. single “Bros” (VIDEO LINK) on The Late Late Show with James Corden, which aired November 2nd, and the single impacted at Alternative Radio.  Wolf Alice was named one of Billboard Magazine’s Artists to Watch in 2015, as well as one of Rolling Stone’s 10 New Artists You Need to Know in the October 2015 issue. Most recently, the London quartet gave stripped down performances of “Fluffy”, “Turn To Dust”, and “Bros”, on NPR’s Tiny Desk Concert Series (Click HERE). Additionally, performances of “You’re A Germ”, “Your Loves Whore”, and “Turn To Dust” will be airing on NBC’s Last Call With Carson Daly on February 22nd. Wolf Alice was also shortlisted for the prestigious 2015 Mercury Prize, received a 2016 Brit Award Nomination for British Breakthrough Act, and a 2016 GRAMMY Award Nomination for Best Rock Performance of “Moaning Lisa Smile”. Poised to return to the U.S. at the conclusion of their U.K. tour this winter, there seems to be no stopping this electrifying four piece.