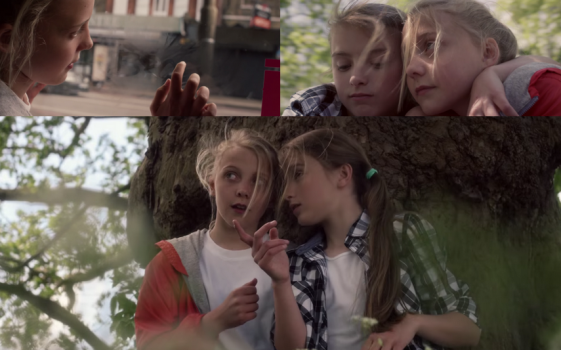 Wolf Alice are stoked to share their newest music video for the blushingly sweet song, “Bros” off the band’s upcoming debut album My Love Is Cool out June 23rd on Dirty Hit/RCA Records. The song is an homage to childhood memories and first premiered on NPR’s Songs We Love, who had this to say about the track: “Propelled by lead singer Ellie Rowsell’s stirring voice, the song is a celebratory but wistful reflection on the waning years of youth.”

The UK rockers have also confirmed an appearance on CONAN for their US television debut that will air on June 16th. The band, who just wrapped up part of their cross-country US tour – including a successful showcase run at this year’s SXSW – will return once more at the end of the June to play New York, Philadelphia as well as Firefly and Austin City Limits festivals. See below for an updated tour listing as well as the band’s striking album cover and track listing. With a huge year ahead of them, there seems to be no stopping this electrifying four piece.

“Believe the hype — Wolf Alice’s debut album is really, really good” – Billboard.com
“The North London rock group Wolf Alice has been picking up steam this year with a potent mix of vintage ’90s rock, electronics and moody atmospherics. It’s a sound that both shimmers and glowers.” – NPR

“Their songs have shades of PJ Harvey’s raw and anthemic take on the blues, but with a bit more polish and a pop attitude behind it.” – Consequence of Sound

“…The British band has proven yet again why they’re one of the most exciting new groups. Combining the sweet vocals of lead singer Ellie Roswell with propulsive guitars and a vibe reminiscent of the Smashing Pumpkins of 1979, the track is both sufficiently pop-y and heavy.” – Wild Honey Pie
My Love Is Cool Album Cover: