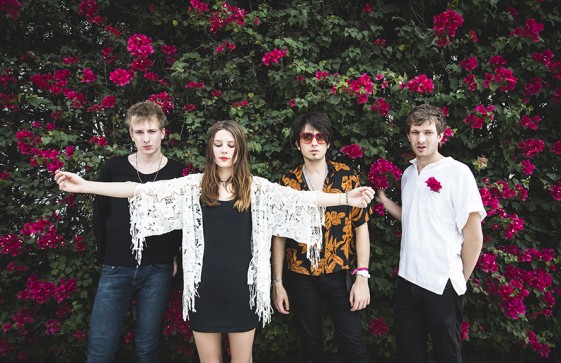 “Wolf Alice is a band (…) whose crunchy, decidedly rock-oriented reinvention is steadfastly unthreatened by a catchy pop melody, a sweet, thoughtful harmony or an earworm bridge and chorus.” – NPR

Wolf Alice are releasing their eagerly anticipated debut album My Love Is Cool on Dirty Hit/RCA Records on June 23rd. PRESS HERE to stream the album NOW via NPR First Listen. Pre-order My Love Is Cool via iTunes or Amazon today.

The London quartet also performed a rousing delivery of “Moaning Lisa Smile” on CONAN yesterday, which had the crowd hooked till the last riff. PRESS HERE to watch and embed it now. The performance offers a taste of the band’s infectious live shows which fans can enjoy as Wolf Alice returns to U.S. to play a run of fall club shows including a stop at Austin City Limits in October. For a full list of live dates, see below.

Adding to the huge week the band are having, across the pond, Wolf Alice graced the front page of NME in the U.K., see below for the striking cover.