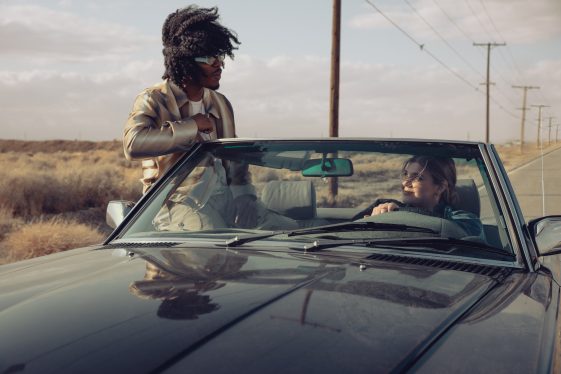 The track was co-written by Yebba, Smino, Q-Tip, and James Francies and produced by Yebba and Mark Ronson.

Yebba shares the inspiration for “Louie Bag” which came to her during a rough period after she lost her mother to suicide:

“Someone said to me, ‘You have to make sure this is not going to make you bitter. Bitterness will rob you.’ And at the time I started that song I was in Resentment City, with all these labels trying to sign me and people pressuring me, telling me, ‘you’re never going to see a deal like this again,’ when I just wasn’t ready. So I said to them, ‘If you ever tell me I’m going to miss my chance or I’m going to run out of time, I will pack my bags and go back to Arkansas and I’ll quit singing. Because if I say I’m not ready because my mom just killed herself, then I’m not fucking ready. The answer is no.’ I don’t even own a Louis bag, but when I got my first check from publishing I wrote that line: “Put it in my Louis bag, don’t let it overflow.” It’s for any label that tried to sign me – for all those men talking to me like that. It’s me talking about all the confusion and the disarray I was feeling at the time, and delivering that right to their doorstep. I just sent those bad vibes right back to those motherfuckers.”

Lead single “Distance” was nominated at the 2021 Grammys for “Best Traditional R&B Performance,” was included on Barak Obama’s annual playlist to extraordinary critical raves. Clash writes: ‘Distance’ is a phenomenal exhibition of Yebba’s dramatic vocal ability.”  Rolling Stone concurs “Yebba delivers a characteristically stunning vocal performance,” and NPR calls the song “the ultimate exercise in restraint. Fully aware of her ability to vocally run circles around any production, she matches the tenderness of the orchestration and lyrics.” Okayplayer continues “At just 25 years old, Yebba has become an acclaimed vocalist due to her unforgettable sound.”

St. Louis artist Smino has been on quite the feature run over the past two years working with artist like SiR , Doja Cat , J.I.D , J.Cole and more while working on his long awaited follow up to 2018’s NIOR that he has been teasing for fans is coming in 2021. Smino dropped his Monte Booker produced record Rice & Gravy earlier this year as warm up to what’s next as the frequently collaborators gave fans their signature sound.

“…a song that’s been haunting my ears since June.

“She has the range…Her daring vocals leap from …falsetto to sultry, guttural contralto. Her delivery defies convention.” – Pitchfork

“(Her debut album) is from start to finish the most incredible body of work and will be one of those albums that will travel with you for the rest of your life.… Really special… Embrace it, enjoy it, it will bring so much joy to your life.” – Zane Lowe, Global Creative Director and Host, Apple Music

“Yebba’s voice is folky and musing, with lyrics that cut into the heart the way she delivers them.  (“October Sky”)… a moving single.” – Teen Vogue

“Imagine Joni Mitchell doing madrigals and you have the idea of what this song (“October Sky”) sounds like. Add to that one of current pop’s most beautiful voices – seriously the Arkansan could sing the times tables and break your heart.” — The Times (UK)

“Incredible vocal talent…Yebba, used this opportunity (“October Sky”) to focus in on a nuanced, nostalgic track that showcases her control…” – Earmilk

“…the glimmer of a generation-defining and defying talent.” – Ones To Watch