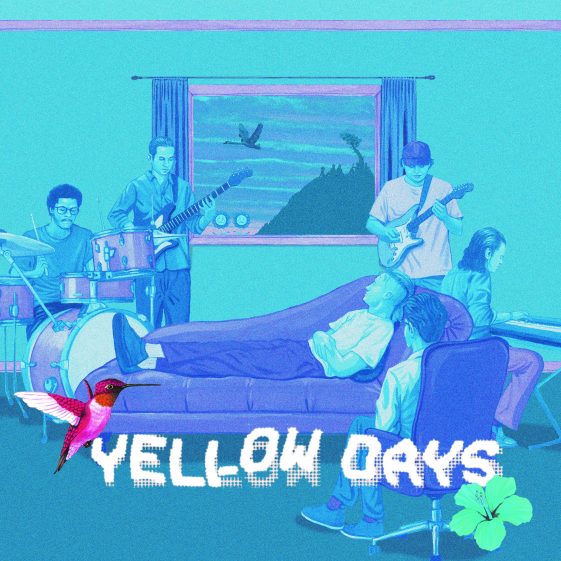 The most recent offering from Yellow Days incredibly accomplished new album A Day in A Yellow Beat (due September 18th) was the sun-shining burst of funked up joy of “Getting Closer” – an ode to music in a summer where music struggled to find its voice in a live capacity. This followed a series of tantalizing tasters of the new record in the form of previous tracks “You,” “Love is Everywhere” and “Treat You Right.”

Next up is “The Curse” featuring long-term friend and collaborator Mac DeMarco. A more somber affair lyrically than its predecessor, “The Curse” still holds tight to the woozy mixture of soul, blues, psych, and groove that you’ll hear across the inspirational album.

Visually, the video directed by Charlie Robins, shows the behind the scenes, stripped back look at a green screen footage where CGI animation turns George and Mac into computerized images amidst glitchy, broken footage. The futuristic elements sit in direct contrast to the nostalgia laden sound the song emits. Once again, illustrating Yellow Days’ ability to makes his music feel both of his era and completely of another.

As well as “The Curse” leading the charge into the release of the new album, Yellow Days has announced a live European and UK tour for 2021. As someone who thrives on the live stage (and having not played a gig since an Annie Mac Presents night in London’s The Jazz Café in October ’19) George is incredibly excited about getting this new record out on the road.

In a previous life, when live shows where a staple part of our existence, Yellow Days had built up an impressive following. On his last tour he sold out Brixton Electric and played two completely sold out runs across Europe and the US. Festivals were also very much part of his playing ground and included performances at Coachella, Primavera and Glastonbury amongst others. See below for the latest run of shows for next year.

Pre-sale for the tour begins Wednesday, September 9th, and general on sale starts Friday, September 11th. Tickets are available HERE. Fans who pre-order A Day in a Yellow Beat from the official store will also get early access to tickets beginning at 10am on Wednesday.

A Day in a Yellow Beat is Yellow Days’ sophomore record and his first for RCA Records. George is a self-taught multi-instrumentalist and self-medicated auteur who has never quite fitted into one style or space. As he readies his new album, his sound continues to warp funky, while his words dig deeper into modern malaise and mental health. It is, as he says, “Upbeat existential millennial crisis music.”

On his current musical direction, inspiration comes from a deep-dive into ’70s: fusion-era works of Herbie Hancock and Quincy Jones, the funkier phases of Marvin Gaye and Curtis Mayfield, and the keyboard wizardry of Don Blackman and Weldon Irvine. He’s been staying up until 5 a.m. watching Soul Train on YouTube, and testing his falsetto. ‘A Day in a Yellow Beat’ is a real-time culmination of ideas, however wild they may be.

Having previously released music produced out of his garden shed in surrey, Yellow Days has spent a lot of time writing and recording this current wave of music in LA with a whole host of incredible artists and musicians – many of whom have / still play for the likes of Raphael Saadiq, Frank Ocean, Weldon Irvine, Kanye West. In doing so, George has taken it back to a more traditional way of making music – from hand-picking the collaborators, selecting the perfect studio setting to recording everything on analogue, vintage gear; all of which has vastly enhanced the sound Yellow Days is now capable of creating. By overseeing the production process, George is more in charge of his own fuzzed-out, technicolor vision than ever. “This is really my first record where I can let it fucking all out,” he says.

Yellow Days remains at its heart, a project about youth. His career trajectory, which began at a very young age, has been a musical outlet for his teenage years and the complexities of transitioning into adulthood. A Day in a Yellow Beat is the culmination of this process to date; a coming of age moment as he commits a wealth of emotions into a vision that projects well beyond his garden shed and onto the global stage.

Listen to and watch “The Curse” and pre-order A Day in a Yellow Beat above, see album art and track list below and stay tuned for more from Yellow Days coming soon.