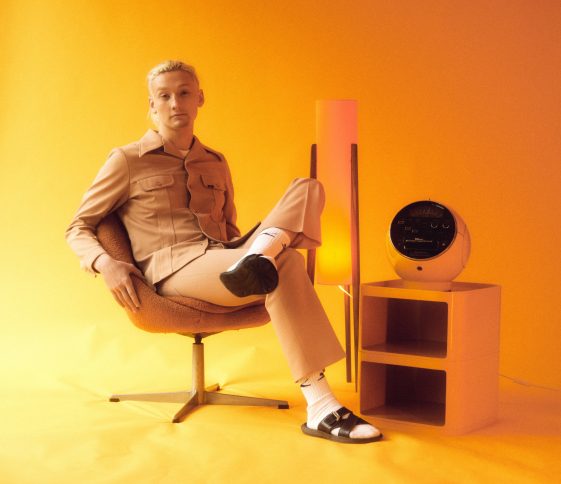 [New York, NY – August 7, 2020] Yellow Days has been steadily unveiling his upcoming new album via a series of singles in recent months. “Treat You Right,” “Love is Everywhere” and “You” have been tantalizing teasers of what to expect from new album A Day in a Yellow Beat – and new offering “Getting Closer” is no exception.

An upbeat love song to music which celebrates its unique unifying properties, “Getting Closer” is a sun-shining burst of funked up joy that is sure to put a smile on anyone’s face.

George had this to say about the track, which was written and produced by himself and features additional vocals from Shirley Jones of The Jones Girls: “‘Getting Closer’ is a track of celebration about feeling like you’re over a hump in your life. Knowing there’s still a long journey ahead and things still need work but that you’re just that little bit closer to a true inner peace and just edging that bit closer is a joyous thing to be celebrated. It’s an unapologetic ode to positivity and better days ahead.”

George van den Broek’s patented element of modern nostalgia cuts a line through everything Yellow Days does, be it his music or visual presentation. His music, fittingly, feels both of his era and completely other: a woozy mixture of soul, blues, psych, and groove leaking through the walls of a jazz lounge that’s come unstuck in time but ultimately, Yellow Days is a project about youth.

A Day in a Yellow Beat is Yellow Days’ sophomore record and first for RCA Records. George is a self-taught multi-instrumentalist and self-medicated auteur who has never quite fit into one style or space. As he readies his new album, his sound continues to warp funky, while his words dig deeper into modern malaise and mental health. It is, as he says, “Upbeat existential millennial crisis music.”

On his current musical direction, George explains: “I’m trying to brand my own version of ironic dance music full of depressing truths about feeling distant from your friends, or a sense that nothing is worth anything.” In particular he’s been diving into the ’70s: fusion-era works of Herbie Hancock and Quincy Jones, the funkier phases of Marvin Gaye and Curtis Mayfield, and the keyboard wizardry of Don Blackman and Weldon Irvine. He’s been staying up until 5 a.m. watching Soul Train on YouTube, and testing his falsetto. A Day in a Yellow Beat is a real-time culmination of ideas, however wild they may be.

Having previously released music produced out of his garden shed in Surrey, Yellow Days has spent a lot of time writing and recording this current wave of music in LA with a whole host of incredible artists and musicians – many of whom have / still play for the likes of  Raphael Saadiq, Frank Ocean, Weldon Irvine, Kanye West. In doing so, George has taken it back to a more traditional way of making music – from hand-picking the collaborators, selecting the perfect studio setting to recording everything on analogue, vintage gear; all of which has vastly enhanced the sound Yellow Days is now capable of creating. By overseeing the production process, George is more in charge of his own fuzzed-out, technicolor vision than ever. “This is really my first record where I can let it fucking all out,” he says.

Yellow Days remains at its heart, a project about youth. His career trajectory, which began at a very young age, has been a musical outlet for his teenage years and the complexities of transitioning into adulthood. A Day in a Yellow Beat is the culmination of this process to date; a coming of age moment as he commits a wealth of emotions into a vision that projects well beyond his garden shed and onto the global stage. Ever-evolving creatively, George is always thinking of the next steps and where his journey will go, “When I become a bit older, maybe I’m not Yellow Days anymore” At which point, he’ll most likely find himself leading the house band in a quantum disco at the edge of the universe. But until then, A Day in A Yellow Beat is coming, so settle in for the ride.