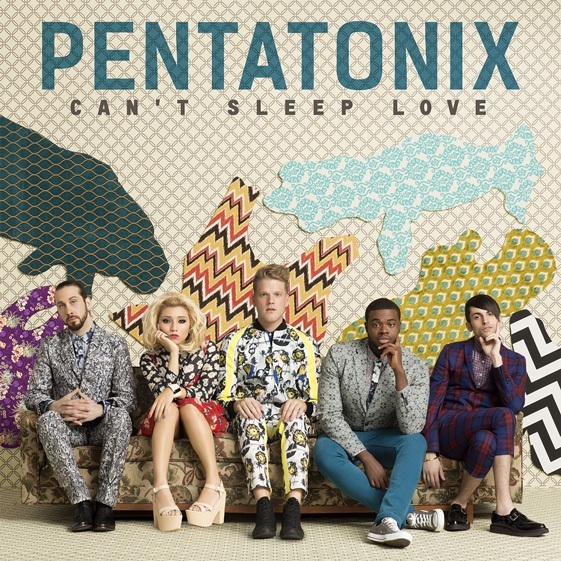 Grammy award winners and platinum selling recording artists Pentatonix release the track and music video for "Can't Sleep Love" today. "Can't Sleep Love" is the first single from the group's forthcoming self-titled debut studio album which is set for release on October 16th via RCA Records. The 13 track standard album and 17 track deluxe album is available for pre-sale at Apple Music and Amazon.

Earlier this month, Pentatonix released the music video for their cover of OMI’s “Cheerleader”. The video has already received over 6 million views. The group has been performing the track this summer on their tour with Kelly Clarkson. For a list of remaining tour dates, please visit www.ptxofficial.com/tour.

After wrapping their SOLD-OUT On My Way Home World Tour, the group continued their whirlwind year with the release of their first ever documentary (On My Way Home). The concert film follows the quintet throughout their sold out 2015 North American tour featuring behind-the-scenes footage, live performances and the making of their debut album.

Since bursting onto the scene in 2011, Grammy Award-winners and platinum selling recording artists Pentatonix have sold more than 2 million albums in the U.S. alone and has amassed over 1 billion views on their YouTube channel with nearly 9 million subscribers. Most recently, the group received 2 gold certifications for “Daft Punk” and cover of Imagine Dragons’ “Radioactive” ft. Lindsey Stirling. Their latest holiday album - That’s Christmas To Me - sold more than 1.2 million copies in the U. S., becoming one of only four acts to release a platinum album in 2014. In February 2015, the group received their first GRAMMY® Award for Best Arrangement, Instrumental and A Cappella for their “Daft Punk” medley. Earlier this summer, Pentatonix made their film debut in Universal Pictures’ Pitch Perfect 2.

Kevin Olusola Releases “Turn Your Eyes Upon Jesus” from The ... Renegade EP

Kevin Olusola covers John Legend’s “All Of Me”