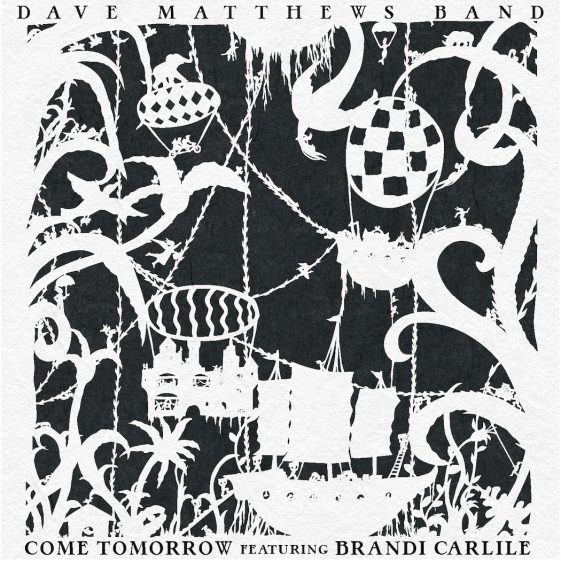 Today, Dave Matthews Band released a new version of “Come Tomorrow,” the title track from its latest album, which debuted at No. 1 on the Billboard 200 and also took the No. 1 spot on the 2018 Current Rock Album Sales chart. While the original version of the song – praised by Billboard as “[an] irony-free plea for peace and hope for future generations” – featured exquisite backing vocals from three-time GRAMMY® Award winner Brandi Carlile, the new single finds the pair also trading lines on the second verse and shines a spotlight on their stirring harmonies in the chorus and bridge. The track was produced by Mark Batson and John Alagia. The single is now available on all streaming services HERE. View the animated lyric video for “Come Tomorrow” HERE.

Brandi Carlile said, “It was an honor to lend my voice to Dave Matthews Band’s prophetic vision. Dave Matthews has one of the most iconic voices of our generation.”

Dave Matthews Band resumes its North American headline tour tonight with the first of two performances at BB&T Pavilion in Camden, NJ. The summer run also includes two-night stands in Noblesville, IN; Elkhorn, WI; Saratoga Springs, NY; West Palm Beach, FL; and Greenwood Village, CO. The band will return to the Gorge Amphitheatre for its traditional three-night Labor Day run August 30-September 1, pushing its total number of performances at the scenic venue above 60. The tour will conclude on September 22 at the 2nd  annual Sea.Hear.Now Festival in Asbury Park, NJ.

Exclusive broadcasts of live concerts from Dave Matthews Band’s 2019 tour are now airing as part of the DMB Friday Night Concert Series on the SiriusXM channel, Dave Matthews Band Radio. The channel, which will be live through Sunday, September 15, also plays music from the band’s extensive career and features exclusive interviews with each member.

The GRAMMY Award-winning band has sold more than 24 million tickets since its inception and a collective 38 million CDs and DVDs combined. With the release of 2018’s Come Tomorrow (RCA Records), Dave Matthews Band became the first group in history to have seven consecutive studio albums debut at No. 1 on the Billboard 200.

Three-time GRAMMY Award-winning singer, songwriter, performer and producer Brandi Carlile is in the midst of a landmark year following the release of her GRAMMY-winning album, By The Way, I Forgive You. Produced by Dave Cobb and Shooter Jennings and recorded at Nashville’s historic RCA Studio A, the album includes ten new songs written by Carlile and longtime collaborators and bandmates Tim and Phil Hanseroth, including “The Joke.” Of her breakthrough performance of the song on the live GRAMMY broadcast, The New York Times proclaimed, “Carlile’s vocals were robust, ragged, full of sneer and hope. On a night curiously light on impressive singing, it was an uncomplicated, genuine, cleansing thrill.” Over the course of their acclaimed career, Carlile and her band have released six albums. For more information, visit www.brandicarlile.com.