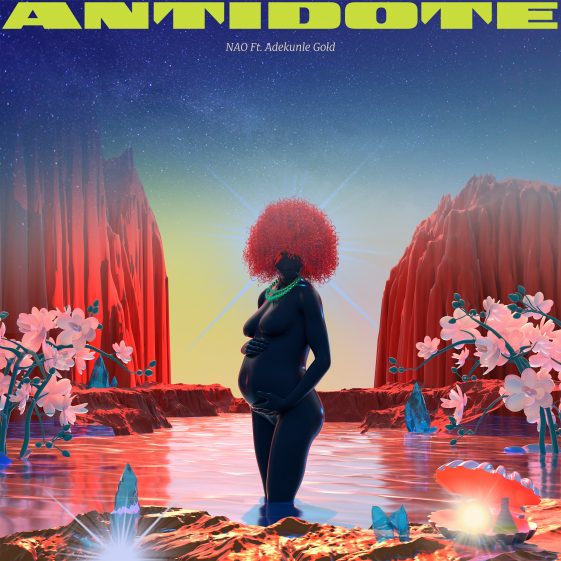 Making a bold return to the spotlight, the 2019 Mercury Prize and 2020 Grammy nominated songstress returns after a two year hiatus with music that is infused with rhythm, movement and meaning, and her new track is no exception. “Antidote” is a sultry Afro-pop love song which pays a strong homage to the sounds that emerge from Africa; with a heavy use of drum and bass loops, an infectious bassline and melody, and the combination of both Nao & Gold’s velvety vocals (and African vocal adlibs), the track exudes an ethereal, carefree sound, as well as one laced with the theme of a spiritually and physically linked romantic connection as the artists proclaim: “you’re my antidote, cause I’m in love, you already know”.

With a reference to higher realms, energies and good vibrations a staple theme in Nao’s music, “Antidote” brings us summer vibes in the winter, and is a nostalgic sound of summers past, yet sets the tone of the fresh direction the songstress is growing into on the return from her hiatus. Set to be another hit for the East London-raised Nao, this single, and what’s to come, marks a meaningful return to the spotlight, and the proof in her resolve and natural artistry.

Speaking on the inspiration behind “Antidote,” Nao stated: “’Antidote’ is the remedy to 2020, it’s a song born out of lockdown which was something that affected everybody’s lives all over the world. Both Adekunle and I had daughters born weeks apart during this time, they lifted our vibrations and we wanted to share that good energy with the rest of the world.”

Adekunle Gold also echoed her sentiments perfectly by adding: “This song is a perfect description of how I feel about my daughter. Love usually feels like a concept, sometimes invisible, but with her it’s so tangible because she’s right there. I’m so obsessed with her that if she wasn’t around me, I wouldn’t be ok, I guess that’s what antidote is, a cure, a loving cure to the things that ail me.”

Nao Recruits 6LACK For New Track “If You Ever”