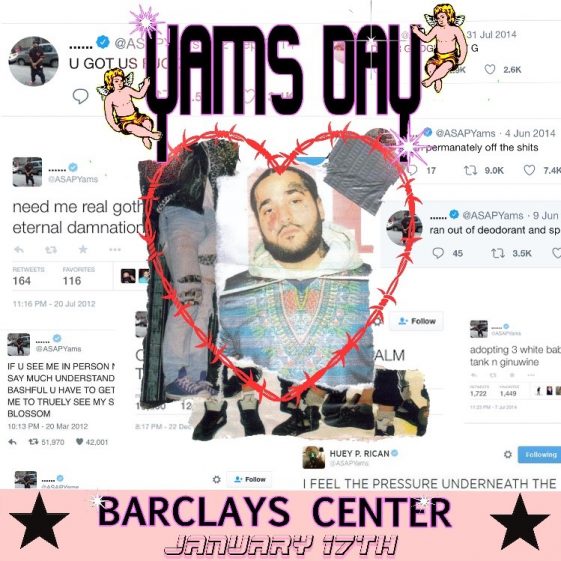 TICKETS ON SALE FRIDAY, DECEMBER 14 AT 10AM

Tickets go on sale Friday, December 14 at 10am EST smarturl.it/YamsDay2019.

A portion of the ticket sales will be donated to the Always Strive And Prosper Foundation. Founded three years ago by Tatiana Rodriguez, Yams’ mother, the organization is dedicated to providing young people with accessible and realistic education about substance use and abuse.

Continuing to engage his fans with creative drops, today A$AP Rocky released the video for “Tony Tone” off his third studio album, TESTING, which has garnered over 1 billion streams worldwide, landing at #1 on the iTunes charts in 16 countries upon release earlier this year.

A$AP Rocky will also be hitting the road this winter with his Injured Generation Tour.  Playboi Carti, Ski Mask The Slump God and Comethazine will join him on select dates.

The 18-city North American tour kicks off on Tuesday, January 8th in Minneapolis at The Armory, and will make stops in Los Angeles, Chicago, Philadelphia, Atlanta and more, before wrapping on Wednesday, February 6th in Kent, WA at accesso ShoWare Center. The tour is produced by AEG Presents.

Tickets are available now at https://tstng.co/shows.html