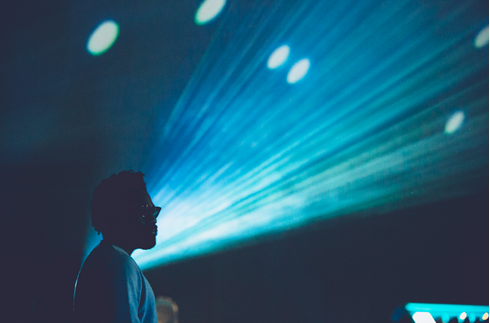 WETA DIGITAL AND 2n FOR 3-DAY FESTIVAL IN NEW ZEALAND

The nominations come on the heels of Gambino’s second successful PHAROS immersive experience in New Zealand. Held November 23-25 in Auckland’s Tapapakanga Regional Park, the 3-day event was the convergence of live entertainment, technology and culture. Gambino and his team at Wolf + Rothstein partnered with adidas Originals, The North Face, Epic Games, Weta Digital and 2n to deliver a once in a lifetime experience for all in attendance.

The Newcastle Wellness Center, an immersive experience created by adidas Originals, provided attendees with an onsite meditation oasis. The installation offered an early glimpse of some of the themes and ideas that Originals and Donald Glover will be exploring in their creative partnership in 2019. “The way Donald Glover (aka Childish Gambino) encourages people to think differently about the expected drew us to PHAROS,” said Jenny Pham, adidas Originals’ Global Senior Director of Brand Communications. “By bringing together a unique group of people, inviting them into a multifaceted, immersive experience, Glover provokes those in attendance to think about music festivals in a more discerning way and urges them to be more attentive, present and aware of what they are experiencing. As a collaborative partner, he shares our commitment to challenge convention to create something special and completely unexpected.”

Each evening under the dome, Childish Gambino delivered high-energy and electrifying performances of his hit songs and fan favorites “This Is America,” “Redbone,” “Sober” and more.  “PHAROS is an experiment in the future of communal spaces and we appreciate the trust of fans who travel across the world to participate in these experiences. We collaborated with major partners for PHAROS New Zealand to elevate the quality of the event as we evolved from PHAROS Joshua Tree.” said Miles Konstantin, W+R Creative Technical Director and PHAROS Co-Founder.

Every show was complemented by multi-sensory content deftly executed by Epic Games, Weta Digital and 2n.

Epic Games is known for delivering high fidelity, interactive experiences to PC, console, mobile, AR, VR and the Web using the company’s Unreal Engine, and they raised the bar at PHAROS. Jay Wilbur, Vice President of Business Affairs, stated “Unless you’ve been living under a rock you know why anyone would want to work with Childish Gambino. His influence in music and pop culture is immeasurable.”

With six Academy® Awards for Outstanding Visual Effects, Weta Digital is one of the world’s premier visual effects companies. “World-class artists, whether they are musicians, actors or filmmakers always push you to do something new, something that has never been done,” said David Conley, Weta Digital Executive Producer. “Their creative vision is the catalyst for the innovation and creativity we bring to the table.” Keith Miller, Weta Digital VFX Supervisor added: “Working in an immersive visual space is an exciting extension of what we do in our feature film and television work. After meeting Donald and his team we saw an opportunity to blend his truly unique live musical performance with the type of ground-breaking imagery our artists are known for. It allows an audience to appreciate the artistic component of our work in a completely new way.”

2n is a pioneer of designing interactive touring show systems and creating original content for immersive experiences. “This project represents a deep collaboration across several teams of artists, designers, programmers, and engineers, all of whom are fundamentally committed to pushing the boundaries of realtime rendering. What was most exciting about creating this hour plus of gorgeous 3D content was that the software’s underlying technology allows us to render the show at a staggering resolution and control all elements of the game-world in realtime, alongside the band,”said Alejandro Crawford, 2n Co-Founder and Creative Director.

Those who camped overnight had the opportunity of doing so with the limited-edition tents and backpacks created exclusively for PHAROS by The North Face, the world’s leading outdoor brand. “Childish Gambino shares the same sense of exploration as The North Face – he is always pushing the boundaries of what it means to be a musician,” said Tom Herbst, Global Vice President of Marketing at The North Face. “Through PHAROS we’re proud to be a part of an event that embodies this mindset giving fans an unparalleled experience to connect with new music, people and the world around us.”

Childish Gambino (aka Donald Glover) is a Grammy, Golden Globe and Emmy Award winning recording artist, actor and producer. Gambino’s 2016 album Awaken, My Love! featured the hit single “Redbone,” which won a Grammy for Traditional R&B Performance in 2018. Spring 2018, Childish Gambino released the critically acclaim song and Hiro Murai-directed video “This is America,” under his new label partnership with Wolf+Rothstein/RCA Records. “This is America” debuted at #1 on the Billboard Hot 100 Chart (a first for Gambino), is currently RIAA double platinum (achieved platinum sales status in just 3 weeks), and to date, its captivating video has enjoyed over 400 million views (broke the internet with 110 million views within 9 days of its release). This fall, Childish Gambino kicked off his sold out “This is America” North America tour with special guests Rae Sremmud and Vince Staples.

Inspired by the rich sporting heritage of adidas – one of the world’s leading sports brands and a global designer and developer of athletic footwear and apparel ­­– adidas Originals is a lifestyle brand founded in 2001. With the adidas archive at its foundation, adidas Originals continues to evolve the brand’s legacy through its commitment to product innovation and its ability to filter the creativity and courage found on courts and sporting arenas through the lens of contemporary youth culture. Marked by the iconic Trefoil logo that was first used in 1972 and championed by those that continue to shape and define creative culture, adidas Originals continues to lead the way as the pioneering sportswear brand for the street.

Weta Digital is one of the world’s premier visual effects companies. Led by Senior Visual Effects Supervisor Joe Letteri, Weta Digital is known for uncompromising creativity and a commitment to developing innovative technology. Ground-breaking performance-driven digital characters like Gollum, Smaug, Kong, Neytiri, and Caesar (from The Planet of the Apes trilogy) are widely acknowledged as some of the best digital characters ever put on screen. Weta’s development of revolutionary virtual production workflows for Avatar, The Adventures of Tintin, and the Hobbit trilogy has firmly integrated digital production techniques into the film production paradigm. Weta Digital has six Academy® Awards for Outstanding Visual Effects and is currently finishing work on Alita: Battle Angel and Mortal Engines For more information visit: www.wetafx.co.nz.

The North Face, a division of VF Outdoor, LLC, was founded in 1966 with the goal of preparing outdoor athletes for the rigors of their next adventure. Today we are the world’s leading outdoor brand, creating athlete-tested, expedition-proven products that help people explore and test the limits of human potential. We protect our outdoor playgrounds and minimize our impact on the planet through programs that encourage sustainability. The North Face products are available at premium and specialty retail sporting goods stores globally and we are headquartered in California on a LEED Platinum-certified campus. For more information, please visit www.thenorthface.com.