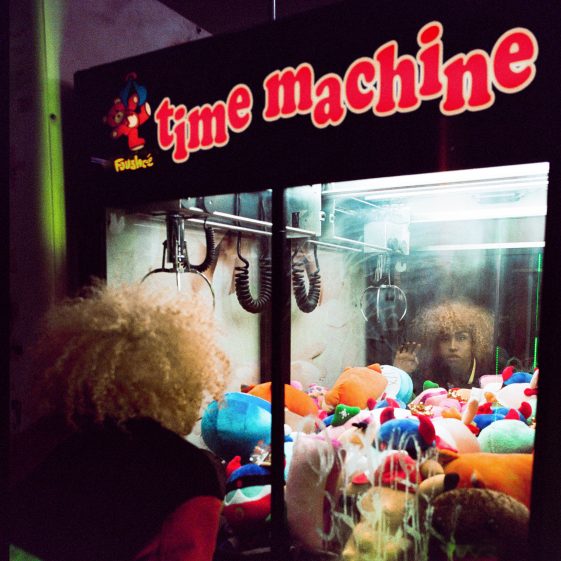 [New York, NY – July 15, 2021] Today, genre-bending singer/songwriter and multi-instrumentalist Fousheé releases the Zhamak Fullad directed music video her for track “clap for him” ft. Lil Yachty (watch here).  “clap for him” is featured on Fousheé most recent project time machine via Trackmasters Entertainment/RCA Records (listen here) along with “deep end” and “my slime.”  The music video made its broadcast premiere on MTV Live, MTVU and on the ViacomCBS Times Square billboard.

time machine received critical acclaim with Pitchfork raving, “the singer-songwriter arrives on her own terms with a debut that flits effortlessly between guitar-based soul, alt-pop, and R&B,” and “That deft balance between Fousheé’s whispery, enticing flow and her aching falsetto is time machine’s greatest asset.  UPROXX stated the project is, “a great way to experience Foushee’s artistry and all she has to offer through it,” while Billboard said Fousheé takes, “listeners on a journey through her reflections and aspirations.”

Most recently, Fousheé appeared on the cover of Wonderland Magazine, the digital covers of UPROXX and Euphoria Magazine, was named as Billboard’s R&B/Hip-Hop Rookie of the Month, Apple’s Up Next Artist for June and MTV’s Global Push Artist For July 2021.  She also released her cover of Depeche Mode’s “enjoy the silence” (click here to listen) which was created specifically for H&M’s new summer campaign, Find The Strength In Silence.

“deep end” currently has over 350 million streams worldwide and landed in the Top 10 at Alternative Radio.  This feat marked Fousheé as the first black female artist to hit the top 10 in 32 years.  The last artist to achieve this status was Tracey Chapman in 1989 with “Crossroads.”  To hear the story of “deep end,” listen to her interview on Song Exploder here.

Born and raised in New Jersey, genre-bending singer/songwriter and multi-instrumentalist Fousheé is currently one of the artists to watch in 2021.  She grew up with music in the forefront her entire life. Her mother, who hails from Jamaica, got her start in music as the drummer for a female reggae band named PEP before moving to America and starting a family. During her early childhood, Fousheé was exposed to a variety of different sounds from her mother’s record collection including Bob Marley, Toni Braxton and Etta James who she now counts as influences along with artists she personally gravitated to over the years like Frank Ocean.

Writing her first song at age six and performing with different girl groups created with childhood friends throughout her formative years, Fousheé always knew that she wanted to pursue a career in music seriously. Yet, she found herself following in the normal footsteps of a teenager and enrolling in college, while still working on music and performing at local café’s on the side. It wasn’t until she and her mom were involved serious car accident that forced her to drop out and help her mom recover from injuries that she fully realized how important her dreams were and that was the turning point for her.

In 2019, after living in NYC and experiencing the music scene there, she set her sights on LA where she was embraced by the music community of creators and began to pursue her dream, honing her craft and learning to play the guitar. Willing to try new things to have her voice heard, she accepted an invitation from Splice to create a vocal sample pack. Splice allows artists to create packs of sounds for a fee which are then made available to anyone who subscribes to their sound library. Creating unique hooks with just her vocals brought Foushee’s outstanding voice to an audience of fellow creators, many of whom immediately recognized how special and evocative it was.  Fast forward to 2020, and Fousheé found herself a viral sensation: a hook from her Splice Sample Pack had been streamed by millions as the basis for Sleepy Hallow’s track “Deep End (Freestyle).” Ultimately this and the influence of her mother and sister inspired her to reveal her identity as the vocalist in a TikTok video that now has over 6.2 million views.