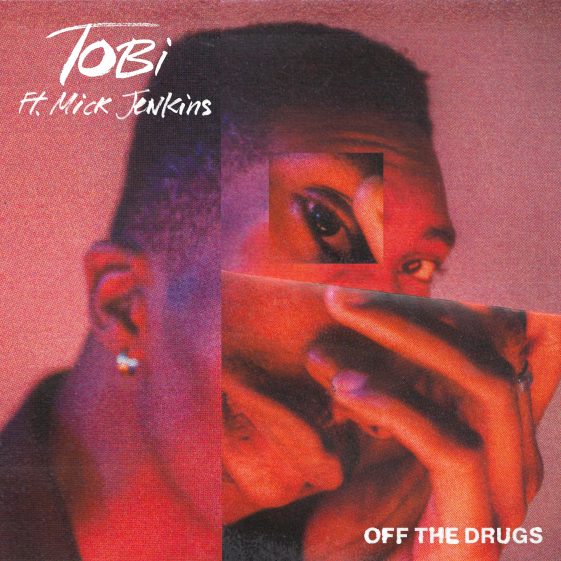 (New York — July 14, 2021) Winner of the 2021 Juno Award for Best Rap Recording of the Year for his project Elements, Vol., Canada-raised/Nigeria-born TOBi and Mick Jenkins today release an old school groove “Off The Drugs” via Same Plate/RCA Records.

Speaking on the inspiration behind the song, TOBi says “When I smoke, I see things clearer and I’m way more aware. So I’m intentional about how I use it. I think more money should go into researching things like cannabis and mushrooms for their healing properties. Just the way I look at it, so many things are actually drugs—alcohol, gambling, even social media cuz it affects brain chemistry, but all that shit is legal. Whereas things that can legitimately heal if properly understood and done correctly are stigmatized, it’s wild. Mick came thru and bodied the verse as he should, and we’ve got a video on the way too. I just wanna live life to the fullest and enjoy this while it lasts. Life to me is a good trip if you let it be.”

The slow burning track follows a handful of TOBi’s singles  “Come As You Are” featuring Baby Rose and “Don’t Touch!” which Complex heralded for its “smooth production…elevating (TOBi’s) empowered musings on the hairy side of the Black experience to new heights.”

His re-working of track “Family Matters” with Flo Milli was described as a “dynamic” and “impassioned reboot” (Atwood) and Highsnobiety declared it a “formidable pairing.”

TOBi released his music project ELEMENTS, Vol. 1 in fall 2020, heralded by the critics, combining hip-hop, R&B, soul, grime & Afrobeats. The project features some of TOBi’s favorite producers & musicians worldwide and embodies the sounds and music that have influenced his artistry. TOBi was voted by Complex Magazine as “a top artist to watch” and has received critical praise from Interview Magazine, Pitchfork, Vogue, Teen Vogue, L’Officiel, Paper, Billboard, Rolling Stone, Clash, OkayAfrica, Flaunt, Exclaim!, Refinery29, Essential Homme, COLORS, and many more. The rising star announced his partnership with Same Plate Entertainment/RCA Records last year and has enjoyed over 49 million streams globally. Prior to ELEMENTS, TOBi released his debut album STILL in May  2019 followed by a deluxe edition, exploring themes of vulnerability, post traumatic growth, self-reflection and masculinity in his time emigrating from Nigeria to Canada. STILL’s release was followed by two new singles “Holiday” produced by !llmind,  “Paid,” the “City Blues Remix” featuring The Game, the “180 Remix” featuring Kemba and the “24” remix featuring all Torontonians SHAD, Haviah Mighty, Jazz Cartier and Ejji Smith.

TOBi has cited the work of Gil Scott-Heron, Frank Ocean, Kendrick Lamar, Marvin Gaye, Eartha Kitt, Florence and the Machine, and Andre 3000 as some of the artists who have inspired his work, particularly his lyrics.

TOBi X Baby Rose Release “Come As You Are”