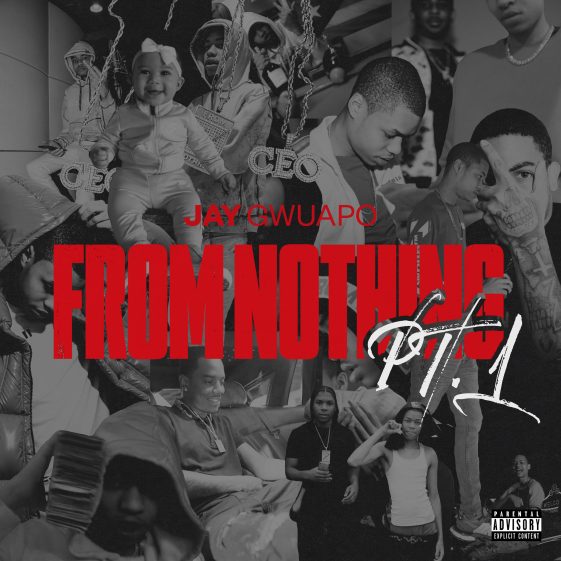 SHARES VIDEO FOR “OH NO” FT. CALBOY VIA HIPHOPDX

What the press is saying about Jay Gwuapo:

“For an artist who’s seemingly very young, Gwuapo reflects on experiences with such commanding maturity.”

“Gwuapo is ready to rise into the musical stratosphere, flexing his bands after coming from nothing. He embraces his past struggles though, never forgetting where he came from and remaining humble.” – Hot New Hip Hop

The project includes features from Gwuapo’s labelmate, Calboy, Lil TJay, Don Q and KJ Balla and follows the release of Gwuapo’s “Oh No” and “No Good For Me” which have collectively been streamed over 5 million times worldwide since release. “Oh No” was also featured on Spotify’s New Music Friday upon release and currently is on Most Necessary and Apple Music’s Best of The Week and The Plug.

Listen to From Nothing Pt. 1 and watch the visual for “Oh No” and keep an eye out for more from Gwuapo coming soon.

Buy/Stream From Nothing Pt. 1 and “Oh No” ft. Calboy video: http://smarturl.it/FromNothingPt1

Brooklyn’s long been a hotbed for the latest and greatest in rap talent, and Jay Gwuapo is the borough’s next rising star. The East New York native is just 18 years old, having picked up rap as a career a year ago—but he’s already making moves that artists with years on him have yet to accomplish. With a series of buzz-generating street singles and a sure-to-be-fire debut mixtape on the way this year, Gwuapo’s talent and hybridized musical style will surely only gain more recognition to come.

Since then, Gwuapo’s dropped a few more choice tracks, including “Steppin’ Out” and the grim, serious “Well Explained”. Eventually word got around to star-making label Polo Grounds Music, whose B. Jacques took particular interest in helping Gwuapo take his career and talent to the next level. “A lot of people were reaching out, but no one connected with me like my son B,” he enthuses. “The love felt different from what I felt from nobody else.”

What’s next for Gwuapo? His debut project. “I’ve come along, and it’s about to go crazy. I want everyone to know that I’m here. Everything that I’m saying you can relate to—that they wanna live and wanna have, their motivations—and I’m spitting good. That should be enough for everyone.” And where does he see himself in five years? Young, successful—and able to prove it: “I wanna be choosing which car I wanna take out of my lot.” If Gwuapo keeps moving the way he’s been, he’ll be facing that choice sooner rather than later.