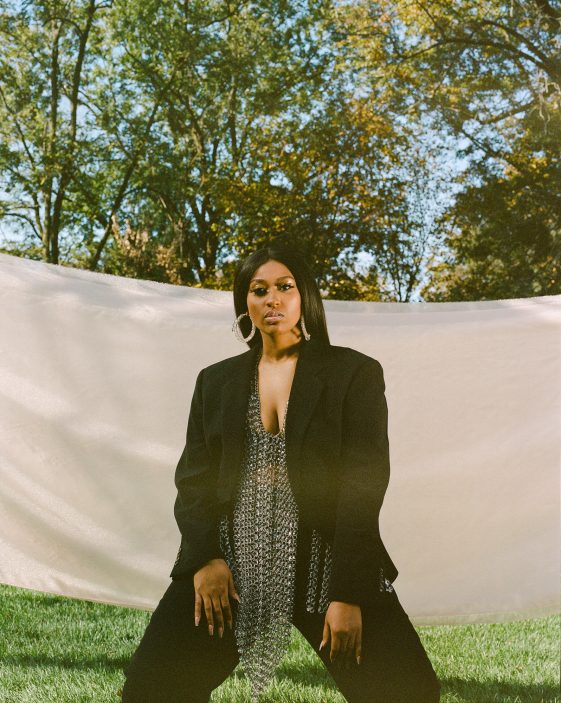 “I wrote ‘Heaux Tales’ to give voice to every woman. We’re deserving of respect whether we work as a CEO of a company or if we’re strippin’. It’s about a woman deciding how she wants to present herself to the world and not being told or influenced by anyone but her gotdamn self.”

Centering around the polarizing term that has been the crux of heated conversations for decades, Heaux Tales is a conceptual project that delves into the male/female dynamic from a woman’s perspective, touching upon empowerment, lust, insecurity, loss and superficial desire.

“Heaux Tales is about my observation of today’s women standing in their power and owning who they are,” says Sullivan. “No longer is male patriarchy dictating what it means to be a ‘good girl.’ The truth is, women of all ages have been called a ‘heaux’ at some point in life, whether deserved or not, by some man trying to put us in our place; a place designed to keep us under control, out of the way and usually beneath them. Women are over feeling ashamed about the decision we have made, or chose to make, in regards to our bodies. We are multi-faceted and shouldn’t be defined by any one thing. We all have a journey to make and it’s our choice alone how we get there.”

The project will include recently released tracks “Lost One” and “Pick Up Your Feelings,” two songs that offer different takes from an ending relationship, both replete with Sullivan’s gravity-defying, chills-inducing voice.

“Pick Up Your Feelings”

“On some days, Sullivan seems like one of the few major-label acts still interested in maintaining R&B’s tradition of acrobatic vocals and electrifying ad-libs… Her voice is raspy, cutting, and pliable, capable of whiplash-inducing direction changes — listen to the way she moves from an earthy descending run (‘no more benefits/pop-up visits’) into a sky-high chorus.” – Rolling Stone

“…a powerful and relatable message of refusing to accept less than you deserve and not taking s— from anyone.” – Entertainment Weekly

“This is that sing-it-with-your-chest, I’m-over-you breakup anthem that you didn’t know you needed.” – Nylon

“Sullivan’s vocals, meanwhile, are as expressive and commanding as ever; her lyrics are as artfully plainspoken as they are heart-wrenchingly confessional… It should be impossible for Sullivan to get lost in the crowd now.” – Pitchfork

“It’s been a minute since Jazmine Sullivan released new solo music, but god damn: “Lost One” makes that time very, very worth it.” – Paper

“I really don’t know how the earth kept spinning for five years without new music from Jazmine Sullivan, but ‘Lost One’ more than makes up for her extended hiatus.” – Refinery29

Often cited as one of today’s most dynamic vocalists, Jazmine Sullivan’s 2008-debut album Fearless featured the chart topping hit singles “Need You Bad” and “Bust Your Windows,” and earned the Philadelphia native seven Grammy nominations including Best New Artist. Sullivan released her second album, the critically acclaimed Love Me Back in 2010, of which the Associated Press declared as “something amazing” and consequently garnered her an eighth Grammy nomination for “Holding You Down (Goin’ In Circles).” Sullivan’s 2015 third studio album, Reality Show, which included fan favorites “Let It Burn,” “Forever Don’t Last,” and “Mascara,” debuted at No. 1 on Billboard’s R&B Albums chart, No. 2 on the R&B/Hip-Hop Albums chart, No. 3 on the Digital Albums chart and No. 12 on the Billboard Top 200.  The album also received three Grammy nominations and appeared on numerous “Best of” lists, including NPR Music which proclaimed Jazmine “is blessed with a ninth-wonder-of-the-world voice: She sounds sly, raspy, nimble, battleship-sturdy, gospel-drenched, emotionally devastating.” Sullivan is the recipient of the Billboard Women in Music Rising Star Award (2010) and BET Her Award (2009).