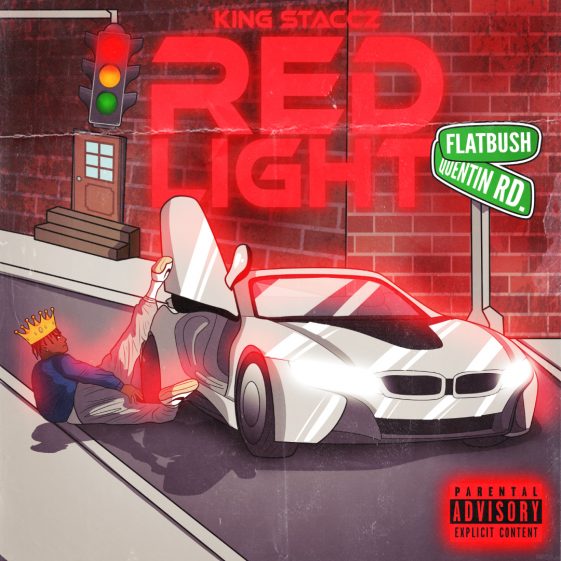 Initially released on his YouTube channel and SoundCloud, “Red Light” has been growing rapidly with its current viral moment on TikTok. Over the last few weeks, more than 200K+ organic videos have been created on TikTok using a snippet of “Red Light” and top influencers such as Addison Rae, Sienna Mae Gomez, Avani Gregg, Bryce Hall, Griffin Johnson, 24Goldn and more have posted a video with the song. Not only has King Staccz hit over 1.1 million followers on TikTok, but combined, the “Red Light” audio has generated nearly 3 million streams and counting.

With the release of “Red Light” and streaming numbers continuing to grow, the Brooklyn native shows no signs of stopping. Stay tuned for more new music from King Staccz coming soon.

Born and raised in Flatbush, Brooklyn, 21 year-old rising Brooklyn rapper King Staccz blurs hard-edged trap music with lush instrumentals and a light touch. He grew up studying classic NYC rappers like 50 Cent while absorbing pop-focused sounds like Madonna and Lady Gaga from what his mother would play in the house. Coming in to the music scene in 2017, he’s released multiples singles independently. In 2019, he released his biggest hit to date “Pretty Face,” which caught the attention of an A&R at Polo Grounds Music. Soon after that, King Staccz signed to Polo Grounds Music and RCA Records. Combined, both versions of “Pretty Face” currently has over 40 million streams worldwide. It also has over 50 million views on Tik Tok and been used in nearly 1 million videos created on the platform. Staccz is an artist unto himself, blocking out the rap world around him in order to craft his own singular style and sound. “I want the world to know who King Staccz is,” he proclaims. “I want people to be like, ‘This is the kind of kid I want to hang out with.’ When I make music, I put my personality into it, and I want people to know who I am. I’m your friend, and inside the music, Staccz is there.”