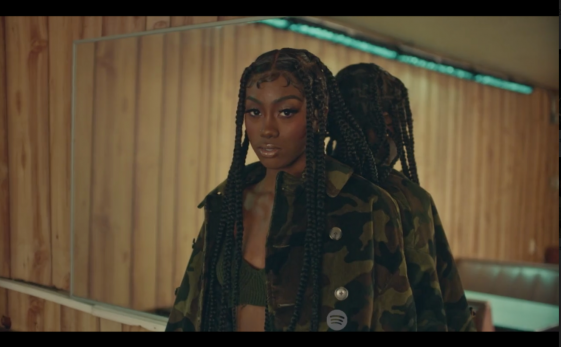 In the 5-min clip, the self-proclaimed Princess of Hip Hop talks about her ambitions, her bold confidence, the first show she booked when she was sixteen (before her family even knew she was rapping), growing up in Mobile, AL, writing music at her movie theater job in high school, up through her massive breakout in 2019.  The video takes viewers to both Atlanta and Alabama as Flo gets her hair braided, reminisces with her family, reflects on her upbringing, and talks about the future.

Her mom makes an appearance, talking about Flo’s “spontaneous” and “bubbly” personality growing up, with old home-video footage interspersed throughout.  Her grandma jumps in to praise Flo’s natural abilities at school, which she graduated from with honors and an advanced degree — making her a stellar role model — noting Flo comes from a legacy of “women that are determined to be our own people and excel at whatever we do.”

Back in January, Spotify’s global emerging artist program, RADAR, announced Flo Milli as the latest artist to receive the honor. To coincide with the release she dropped her first track and visual of 2021 with “Roaring 20s” which was met with critical praise upon release and sees Flo bringing the 1920’s flapper era back to life with a dance-filled visual.

To date the track has over 250 Million streams on the Spotify platform and placements on over 100 Spotify playlists like RapCaviar, Feelin’ Myself, and New Music Friday.

Watch the Spotify mini-doc out now and keep an eye out for more from Flo Milli coming soon.

21-year old, Alabama born rapper, Flo Milli has taken the Internet by storm in her short accent. Releasing her first official track “Beef FloMix” on her SoundCloud in late 2018, she had gone viral by early 2019 on TikTok, marking her breakout success and she hasn’t let up since. Releasing tracks and visuals throughout 2019, she followed up with “In The Party” which has been streamed and viewed nearly 200 million times worldwide.

Known for her bubbly delivery and aggressive bars, in July 2020 she took the internet by storm once again with the release of her debut mixtape, Ho, why is you here ?  On the project, Flo exudes unapologetic confidence and empowers females with her experiences shared in her music, making her a relatable youth figure. Standout tracks from the project include the SWV-sampling “Weak” and “May I.”  The mixtape received great critical support upon release landing on the covers of Spotify’s “Feelin Myself” playlist and Apple Music’s “On Repeat,” along with two Spotify New Music Friday billboards last summer. She received rave reviews in the press from the likes of New York Magazine, Pitchfork, Rolling Stone, Complex, FADER and NYLON, with many calling her the next female rapper to break through and coining Ho, why is you here ? as one of the best projects of 2019.

In March 2019, Spotify launched their global emerging-artist program, RADAR, to help artists across all stages of their career use the strength of the platform to deepen connections to their audiences. They recently doubled down on that commitment by launching the RADAR Global Hub last year, and are continuing to expand RADAR in the U.S. through their newest partnership with Flo Milli.

Keep Up with Flo Milli: