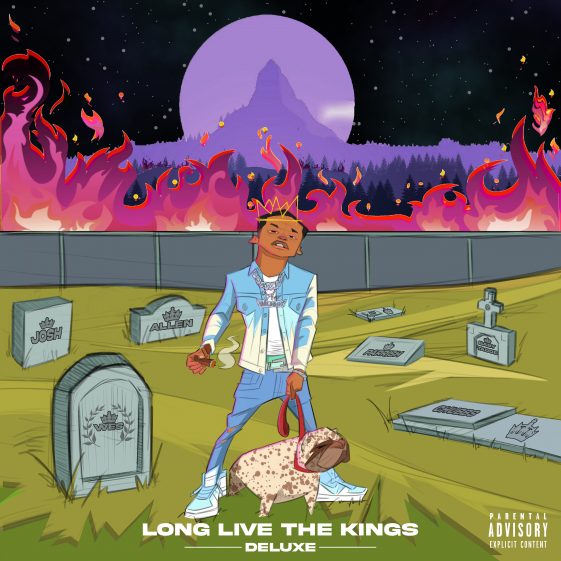 LONG LIVE THE KINGS DELUXE PROJECT DUE OUT NEXT MONTH

Released in February, Long Live The Kings, holds special meaning to Calboy as he juggled rising to stardom last year with his 3x platinum hit “Envy Me,” while also losing six of his closest friends to violence in Chicago. The name Long Live The Kings pays tribute to his fallen friends. The deluxe edition coming July 10th will feature 5 additional tracks that include features from King Von and rising Brooklyn drill artist, Fivio Foreign and more. The original EP included features from Lil Baby, Lil Tjay and G Herbo.

On the initial release, Calboy shared what the title means to him: “Long Live The Kings is an ode to six of my friends from Chicago who passed away last year. Each song speaks to who they were and what they stood for. It’s also a tribute to everyone we lose to senseless violence, including the most recent loss of Pop Smoke. I hope to tell their stories through my music.”

Long Live The Kings was the first full length release for Calboy coming off of an incredible 2019.  Profiled as one of Billboard’s 2019 Chartbreakers, it was a banner year for the burgeoning star with his breakout hit “Envy Me” reaching 3x platinum certification by the RIAA and hitting #34 on the Billboard Hot 100. The track has been streamed and viewed over 1 billion times. Calboy released his Polo Grounds Music/RCA Records debut project Wildboy, which boasted features from Meek Mill, Young Thug, Lil Durk, Yo Gotti and more. The project was recognized on many year-end “Best of 2019” lists including Rolling Stone, Noisey, Hot New Hip Hop, XXL and more.

Watch/Listen to “Brand New” ft. King Von and keep an eye out for more on Long Live The Kings Deluxe coming soon.

A self-taught singer and musician, Calboy started making rap music at the age of 12, influenced by the sounds of drill heroes like Lil Durk with poppier fare like Ed Sheeran. As he began to master making his own instrumentals and songs on Pro Tools, Calboy became involved with YOUmedia, the Chicago public arts program with notable alumni like Chance The Rapper. At the age of 16, Calboy’s music began to catch on in Chicago, reaching the ears of G Herbo, who boosted Calboy’s single. In August 2018, Calboy shared the now 3x Platinum “Envy Me,” which became a Billboard Top 40 hit off the strength of a viral dance craze and has now been streamed nearly 1 billion times. Now signed to Polo Grounds Music/RCA Records, and managed by DreamChasers,  Calboy is ready to take the next step on the ladder to stardom with the release of his major label debut project Wildboy, which was released in May 2019.