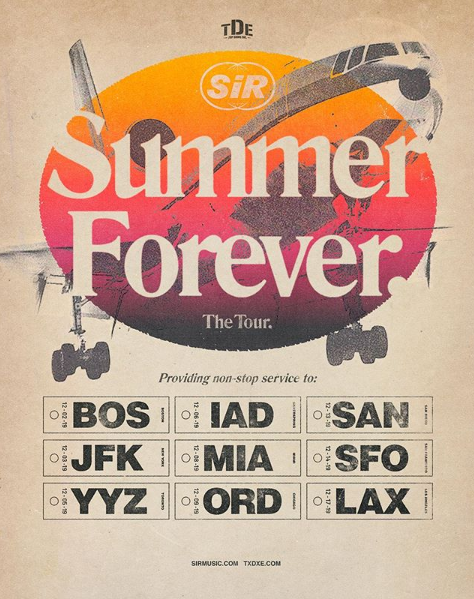 “New Sky” is the third video to be released from SiR’s phenomenal new album, Chasing Summer, which debuted at #5 on the Billboard R&B Albums chart and continues to be a top 10 mainstay on the US iTunes R&B/Soul Albums chart.

Earlier this week, SiR announced the fall dates for his “Summer Forever – The Tour.” Kicking off December 2 in Boston, the 9-date North American jaunt will hit major cities such as New York, Chicago, Los Angeles and more. Tickets are currently on sale at Ticketmaster. See below for full tour dates.

When you hear SiR sing, it’s impossible not to feel it. The Inglewood native first made a name for himself as a songwriting but by stepping in front of the mic and into the spotlight with the release of the HER EP series—HER and HER TOO, SiR garnered widespread praise and quickly became one to watch. In 2018, SiR released his acclaimed full-length debut album, November, featuring production from top talent such as DJ Khalil, Harmony Samuels and more.  SiR’s latest release, Chasing Summer, features a wide-range of music’s finest from Kendrick Lamar, Lil Wayne and Jill Scott, to recent TDE signing Zacari, Sabrina Claudio, Smino and Kadhja Bonet. Production from TDE heavy-hitters like Kal Banx, Taebeast and Sounwave, along with notable producers such as Boi-1da, Michael Uzowruru and LordQuest, sets the tone for 14-track musical journey. As showcased throughout all of his music, SiR’s powerhouse voice and songwriting skills continue to revamp R&B music like never before.